“The River of the Kings”

The Chao Phraya has long played a key role in the history and economy of Thailand. Vital and strategic, it serves as a means of communication as well as transport and has been extremely important in the fostering and nurturing of culture and commerce There are four tributaries contributing to the waters of the Chao Phraya coming down from northern Thailand.

The extremely fertile basin has always attracted many immigrants. Moreover, not only does it cover the central and northern parts of Thailand, it is easily accessible from the Gulf of Thailand. Yet, the Chao Phraya has always been protected from excessive foreign influence.

Bangkok is crisscrossed by many canals called “klongs”. Because of the extensive, vital network of waterways, Bangkok is sometimes referred to as the “Venice of the Orient”. In fact, until the last century, there were probably more canals than roads in the area.

Following her previous life as a traditional Thai rice barge transporting cargos of rice, sugar and sand up-river from Bangkok to remote riverside towns, she was converted to a touring river boat and her name was changed from ”Ieam Jun” to “Mekhala”.

Now, she is re-born as the luxury river cruising vessel “Namthip” that will carry you from Bangkok along the grand Chao Phraya River.

With a handsome hull and deck of solid wood as well as a timber shingled and natural woven bamboo grass covered roof, the approach to the design and decorations for the renewed boat honors the traditional Thai architectural palette of materials including timber paneling, woven rattan, bamboo and solid floor boarding whilst providing luxurious modern-day amenities on both the upper and lower decks.

The boat features 2 luxury, air-conditioned bedrooms sleeping up to 5 guests, both with en-cabin bathroom with hot shower. On the main upper deck, both open and shaded areas will provide casual lounge style seating and star-lit dining arrangements for an intimate group of only 2 or 4, through to a party of 30 guests. Entertaining guests will be taken care of by the boat’s staff and an onboard kitchen and cocktail bar.

Namthip is available for private charters for day cruises, sunset cruises, lunch or dinner cruises and as well as (multiple) overnight cruises.

Below deck, two large guest suites provide generous onboard accommodation. Both suites include separate bathrooms finished with tap-wares by Water Works and European fittings. Air conditioners are artfully concealed while in the master suite, glazed windows can be opened to allow full natural cross-ventilation and daylight as desired.

The master suite is also convertible into a meeting room for onboard entertaining or small group conferences, in privacy. All elements of the boat, from the mechanical to onboard safety equipment, are specified to the highest levels of quality with the intent of offering guests as enjoyable and relaxing an onboard time as possible.

PLACES ALONG THE ROUTE

Koh Kret is an island in the Chao Phraya River. Located in the north of Bangkok, it is home to an ethnic Mon community that came from Burma about 200 years ago. These days they are known for making earthenware products and Thai sweets. The island landmark is a tilting white tower, which is part of the local temple. The slanting tower, which is visible from the river, is believed to point toward the Shwedagon Temple in Burma.

Wat Arun or the Temple of Dawn is located on the western side of the Chao Phraya River. Built in the early 19th century, its name is derived from the beauty of the temple in the morning when the first light of the day reflects off the surface of the temple with a pearly iridescence.

Also a royal temple, Wat Arun is considered one of the landmarks in Bangkok. The outstanding feature of Wat Arun is its central Khmer-style tower called Prang. The height is reported by different sources as between 66.8 m (219 ft) and 86 m (282 ft). The corners are marked by 4 smaller satellite prangs. The towers are decorated by seashells and bits of porcelain, which had previously been used as ballast by boats coming to Bangkok from China.

The four smaller towers symbolize Mount Meru, which is the earthly representation of the thirty-three paradises. Visitors can climb up the tower and enjoy a good view of the temple and the eastern side of Bangkok. 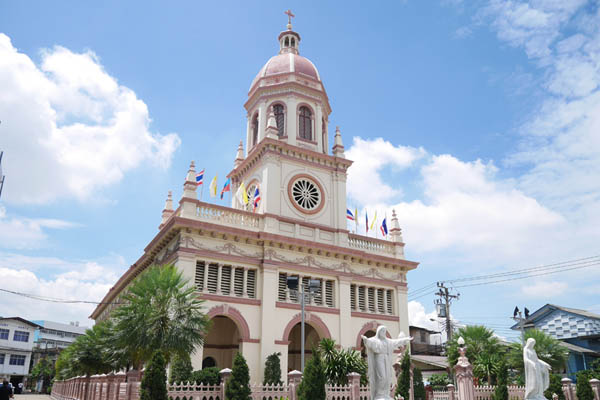 King Taksin gave this plot to the French clergy coming from Ayutthaya. The original cathedral was built in 1768 and named Santa Cruz or Holy Cross. Later on, from 1913 until 1916, the abbot Guilermo Kihn Da Cruz ordered a new cathedral  be built to replace the old one. 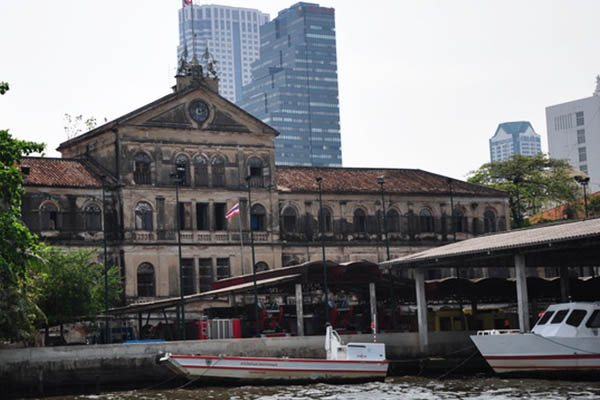 Built in 1880, this building was later converted into a firemen’s barrack. Once the gateway to Thailand, where traders had to pay taxes for moving goods in and out of the country, the building today is now a crumbling yet hauntingly beautiful home to the fire brigade. No renovation has been made to date.

The Grand Palace and the Temple of the Emerald Buddha

The Grand Palace is part of a large complex including the Temple of the Emerald Buddha. It was built in 1782 by King Rama I. All of his successors from the Chakri dynasty have added buildings, and nowadays the Grand Palace incorporates a mixture of styles, including Thai and even Victorian styles.  Today, The Grand Palace is used only for official banquets and other royal ceremonies.

The Temple of the Emerald Buddha, or Wat Phra Keo, is located within the compound of the Grand Palace. It is here that the king undertakes his different religious duties. This royal temple houses one of Thailand’s most revered Buddha statues called Phra Kaeo Morakot.

A spectacular collection of buildings fills the temple, including pavilions,  or chedis protected by mythic gods and goddess. The walls of the cloister surrounding the whole temple are covered by splendid frescos describing the history of the Hindu Epic Ramayana. They were painted during the reign of Rama III (1824-1850) and relate epic battles, intrigues as well as scenes of comedy.